On the 12th November 2018 at the Royal Castle in Warsaw, a ceremonial Gala of the awards presented by the European Business Club Poland was held on the 100th anniversary of regaining independency by Poland. The ceremony was included in the list of events taking place to celebrate the hundredth anniversary of independency restoration and it uses the visual identification of the Multiannual “Niepodległa” Program.

As every year, the Association honoured individuals and companies which in a particular way contributed to the development of entrepreneurship, economy, science, culture and sport in Poland, as well as those who have succeeded on the European and global scale. The 100th anniversary of regaining independency by Poland was celebrated by awarding companies, which have been run within that time period, and also by presenting an artistic, patriotic program made for that occasion.
The honorary awards of the European Business Club Poland were presented to the following Winners:

Main Prize
• VICTORIA EUROPAE 2018 EUROPEAN VICTORIA
The Polish Volleyball Men’s Team for defending of the world championship title in volleyball, for promoting Poland in the world and for a particular contribution in building of the national community strength.

• ENTREPRENEUR MAGNUS 2018 EXTRAORDINARY ENTERPRENEUR
dr Adam Mokrysz for a global expansion of the Mokate brand, for outstanding and effective implementation of modern management combined with good traditions of family business.

• BENE MERITUS 2018 HIGHLY DISTINGUISHED
The Port of Gdynia for a remarkable contribution in the region development, for particular and longstanding achievements in maritime transport development as well as for a brave execution of the vision of port extension into the sea by constructing the External Harbour.

• BENE MERITUS 2018 HIGHLY DISTINGUISHED
The Polish Patent Office for the 100th achievements in industrial property protection in Poland, the European Union and other countries of the world.

• BENE MERITUS 2018 HIGHLY DISTINGUISHED
for Teatr Wielki Opera Narodowa for 170 years of creating the history of opera and ballet in Poland, for the highest level of the art presenting important values taken from the rich, national heritage and from the world literature.

• SIGNUM TEMPORIS 2018 SIGN OF THE TIMES
HEFRA S.A. for 193 years of luxurious production tradition with the Polish soul, beauty and high quality of hand-made products .

• SIGNUM TEMPORIS 2018 SIGN OF THE TIMES
POGOŃ LWÓW for over 100 years of continuing of the Polish sport club tradition, for brave dreams and their realisation .

• PRO FUTURO 2018 FOR THE FUTURE
SPOŁEM Warszawska Spółdzielnia Spożywców Śródmieście for 148 years of cooperative activity for the development of the Polish economy.

• PRO FUTURO 2018 FOR THE FUTURE
Mr Czesław Gołębiowski for a longstanding activity, creativity and economic achievements, and for social activity

• PRO PUBLICO BONO 2018 FOR THE SOCIAL ACTIVITY
Priest, prof. UKSW dr hab. Waldemar Cisło for providing material, medical and pastoral help to refugees and persecuted Christians in Syria, and other countries at war or under religious persecution, as well as promoting the Polish humanitarian activity around the world.

The European Business Club Poland has a holistic approach to business issues. It understands the importance of culture, science, sport, media and the whole surrounding to entrepreneurship. Such a comprehensive approach means a synergy between a business activity and other branches, as a result of which there is a wide development of society, humanity and it improves the level of life, and this is the purpose of entrepreneurship. The Association relies on the accepted rules and the system of values and ideals. These are: culture, ethos, morality, ethics and social solidarity. The Awards of the European Business Club Poland aim at those values, being their personification.
The Honorary Patronage over the Gala was taken by Stanisław Karczewski, the Marshall of the Polish Senate and Prof. dr hab. Zdzisław Krasnodębski, the Deputy Chairman of the European Parliment.
The patronage was also taken by:
• the Ministry of Entrepreneurship and Technology, the Ministry of Investment and Development, the Polish Agency of Investment and Trade, the National Chamber of Economy, the Polish Economic Association, the Polish Employers, the Association of Entrepreneurs and Employers.
• The Main Sponsor of the event was Polskie Górnictwo Naftowe i Gazownictwo Spółka Akcyjna.
• The patron was Deutsche Bank. The partner – the Royal Castle in Warsaw.
• The sponsor was Port Praski.
• The media patronage was taken by TVP INFO, Polish Market, Europerspektywy, Nowy Przemysł, platforma wirtualna Nowy Przemysł, Ambasador, Magazyn Świat Elit and the magazine Why Story.
• The event was supported by Hotel Bristol and the company Walkrys.
As a tradition, the Gala was conducted by journalist Przemysław Talkowski, the winner of the award BENE MERITUS 2015 HIGHLY DISTINGUISHED.
The artistic program started with a mini recital on the piano by a young, talented pianist Krzysztof Trzaskowski. The artist played the pieces by Frederic Chopin twice. The official part started with the Polonez dance by the “Warszawianka” Song and Dance Ensemble from the University of Warsaw, awarded with the prize PRO FUTURO 2017 FOR THE FUTURE. The program included also Paintings made with sand by Tatiana Galitsyn, a beautiful, specially made for this occasion show related to the 100th anniversary of the Polish independency reestablishment. The awards ceremony was ended with a wonderful concert of patriotic songs by the world-famous tenor Bogusław Morka, who accompanied by the piano charmed the audience with his beautiful voice, the selected repertoire and an amazing contact with the listeners.

Next, the guests went to Arkada Kubickiego to raise a toast and attended a reception during which they could taste the best Polish fish. The table with the Polish fish, which really interested everyone, was prepared as a promotion under the Operation Program “Fishing and sea” for years 2014 – 2020 executed by the Ministry of Maritime Economy and Inland Waterways Transport. Among this year winners, the stands with products were presented by: the company MOKATE with a very good coffee, tea and cookies, and the Living Museum of Gingerbread with delicious gingerbread made on the spot. Both stands were really enjoyed by the guests.
The guests evaluated very high both the winners, the artistic program and the delicious and varied cuisine.
More information about the Gala and the Winners can be found on: www.ekb.org.pl
We would like to congratulate to the Winners! 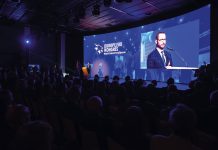 Record of Attendance at the 8th European SME Congress in 2018

The most modern gynaecological hospital in Śląsk