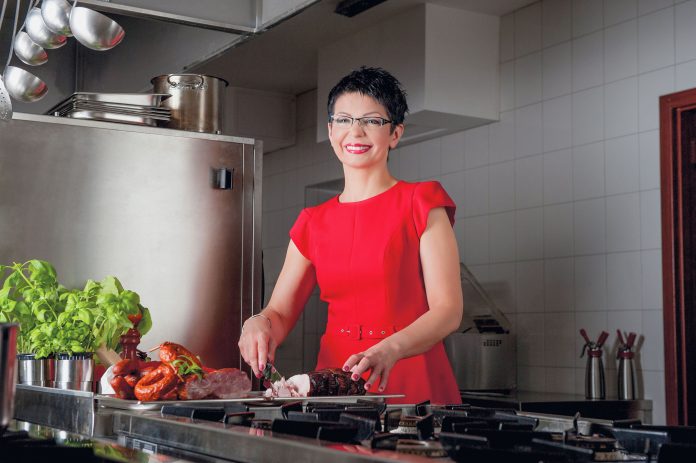 Anna Cichoń is an incredible woman from the region of Silesia: she is an artist, an entrepreneur and a social activist. She used to help her husband to achieve his plans, now she decides to develop herself. Together with her sons she runs an international horsemanship centre and she promotes arts – not only the culinary art in her own restaurant in Radzionków. She has just been nominated to the title of the Charismatic Woman.

Development
She has always had lots of ideas for life. It has brought her many challenges, but also opportunities for development, as she admits. Being the great lover of Chopin, she graduated from a music high school in Katowice, where she practised playing the piano. She also graduated from high school with a diploma in maths and physics, but she never decided to continue studying those subjects later on. After the maturity exam, Ania astonished her family and friends, and took successfully the entry exam to the University of Natural Science in Lublin to study the phytopathology of plants. And she became “the plants doctor”. – I met my husband after I finished the university, while working at the Centre for Plants Quarantine and Protection in Ruda Śląska – she says. He impressed her a lot, as he was ambitious and resourceful. They were both Leo zodiac signs, so they were determined to achieve ambitious goals. She admits she learnt a lot from him.
After getting married, they started the meat processing plant HAM in Radzionków. Anna completed the course in accountancy, so when the chief accountant left the company, she could easily take over the duties. – The business was thriving, the company was growing. We employed 600 people, we had wholesale centres, shops – she recalls. – I was fulfilled in my job, and I also excelled my qualifications. Finally, she became the manager for finances. She started her job at 6 am. She left the office at 3 pm, and went to run their family restaurant. Then, she also had her third job at home, where she had to clean everything, cook meals and take care of the children. She worked at the meat plant for 25 years until the divorce.

New life, new challenges
She didn’t despair, because she started to discover new wonders of life. The time came to fulfil her own plans and dreams. She could come back home after the events she arranged at any time she wanted, without having to explain to anybody why so late. – I used to be a grey, frightened mouse
– she says pensive. – My husband took all decisions, and I only took care of executing them. In her work, she focused on developing the restaurant and hotel Appassionata and the horsemanship club on the international scale. She also got involved in social work more.

Now Anna Cichoń starts her day very early at 5 am. First, she goes to the gym, then to do her duties. But such a dynamic woman, doesn’t stop only on her professional obligations. This wouldn’t be simply her style. – I became open to people, now I have more friends than ever – she admits cheerfully. – I work actively for various associations, e.g. the Business-Commerce Chamber in Tarnowskie Góry and Bytom, the Foundation of Silesian Angels
or BNI, and I will be glad to join the Association of Charismatic Women.
She is permanently involved in supporting the nursery centre for children in Piekary Śląskie. It is a place where uncared children spend time after school, get food, medicines. She sponsors charity marathons – one of them was organized to support the child of the cook working her who needed rehabilitation. She also supports the Silesian Opera and sports clubs, e.g. Ruch Radzionków. Helping the people in need is a different taste of life for her. She puts all her heart in everything she does, e.g. running the restaurant.

Appassionata – with passion and love
She has created a passionate cuisine, which she has made into a real art. – When making dishes, you cannot accept any false thing – notices the woman of artistic soul and highest managerial competence. Appassionata has changed significantly in the last years. From a common restaurant, it has become a place which you want to visit and take the pleasure of eating as well as listening to music, absorbing sounds with all your senses. You can feel there love, emotions and passion. The name taken from the Italian language becomes meaningful.
Although Anna Cichoń employs a chef, she takes part in creating the menu, because she likes cooking and experimenting in the kitchen. Sometimes she hosts 120 people. She gets involved in organizing charity carnival parties, e.g. the Ball of the Foundation of Silesian Angles or the Wien Ball. She invites top artists to concerts, such as Kasia Kowalska, Michał Bajor or Krzysztof Cugowski. She also arranges theme evenings – Italian, Georgian or with the wines of the Habsburgs old empire.
The absolute hit at the restaurant is “the dinner in the dark”. – Let’s imagine eating in the complete darkness and the feeling when you don’t know what is on the table – says Anna. – It is the time when senses become sharp to the maximum. The leading roles are played of course by the sense of smell and taste. The guests can only rely on these two. There is a moderator in the room, who leads the guests to the tables and accompanies them during the dinner. To make the job easier, the waiters are equipped with night vision devices. And the dishes are absolutely surprising! For example, a pine jelly in ash, or a dish that is a combination of perch-pike and salmon. For a dessert, there is parsley or horseraddish ice-cream! Indeed, the chef must prove his great imagination.

Horses – a family passion
Both sons of Anna Cichoń – Mateusz and Michał – love horses and want to devote their lives to them. The older son completed the legal studies with A. Now he is doing the barrister’s training . He has a lot of duties, but he finds time to train horse-riding 3-4 hours a day. They are both members of the national team and they many sport successes. Mateusz has won many trophies in the country and abroad, he has two championship titles of the Junior Champion of Poland in horse-riding. Michał trains MMA and also wins tournaments very often.
– Since the earliest years, we have supported our sons in their life decisions – says Anna. – The older son was 9 when he started riding a horse. Then I also learnt this sport by taking him to tournaments. We opened a horsemanship centre in Radzionków, which is next to my restaurant. I run it together with my sons. It focuses mainly on professional riders. We organize here the horsemanship tournaments, which are really popular. Every year we have more and more visitors. First, there were local events taking place, then the national ones, and finally the international tournaments. Four years ago only 100 horses took part from all Europe. Now the centre organizes the Championships of Poland for Students, the Championships of Poland in Horse-ridding and eliminations to the Adolescents Olympics.
– We have 15 own horses and the other 15 at the hotel we run – says Anna. – The season always starts with presenting the stallions. Last years it was watched by 700 spectaculars, and in the VIP zone there were 250 people. The show was held together with the fashion show of the famous designer Natasza Pawluczenko and the display of diamond jewellery by Marianne Helgstrand, wife of the Danish horse rider and trainer Andreas Helgstrand, who has won the medal in the Olympics and the World Championship, and who works with Anna’s son. – This was a high level event. Soon there will be another event, a foals auction in the autumn. The event is organized by my son’s Mateusz company, Cichoń Dressage, and I have been invited by him to co-operate – says the proud mother. Mateusz and her younger son Michał take care of the stables, trainings, transport, etc.
She co-ordinates all events, shows in terms if finances and organization. And she admits it gives her a lot of pleasure.

The Cichoń family also runs the horse breeding centre. It complies with the highest standards and it is allowed to run distribution of stallions seed in the European Union. In 2017 it sold 20 units of seed, and this year it was five times more. This business has been developing well.
The year 2018 was for Anna another, challenging year of hard work and professional successes. What can we wish to such a charismatic woman for a new year? – I wish the restaurant was full of life, so that it attracted lots of guests, I wish I could continue developing the family business with my sons and I wish my private life became more colourful – smiles Anna Cichoń and she adds: Dreams don’t come true themselves, we make them come true … 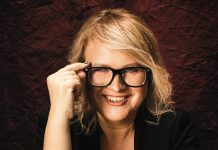 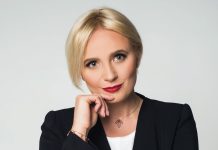 H is for Health

Only for boys – an interview with Anna Barauskas, the author...