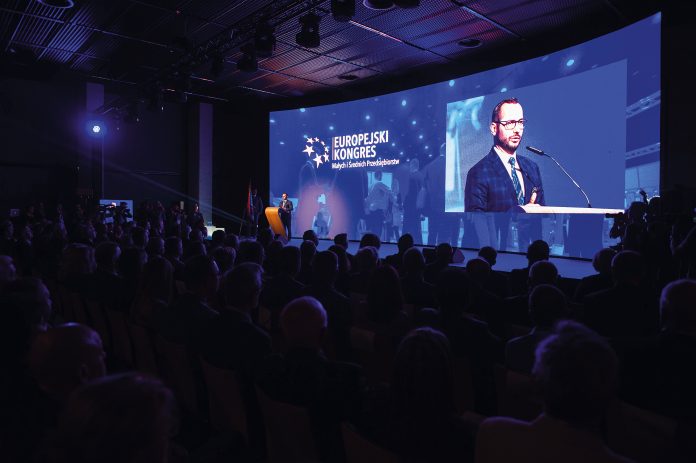 Within three days, the 8th edition of the EKMŚP, which took place in October 2018, registered over 7,500 participants. This means that last year’s attendance record was broken. During the event over 100 panels took place as a part of a record number of 12 thematic tracks. This year, the Innovation and Knowledge Zone debuted – an original project of workshops and presentations of the latest digital solutions. Congress guests not only established business contacts and gained practical knowledge but also gained enthusiasm to conduct and develop business.

The next, 8th edition of the European Congress of Small and Medium-Size Enterprises has gone down in history. It was started, just like Wednesday and Thursday, Business Expo Fair, which consisted of the Presentation Zone, Workshop Zone of the Good Practice Forum, Expert Zone and Networking Zone. In each of them those interested where able to got inspired by other businesses, talk to experts from institutions that are important for functioning of companies, learn how to consciously use knowledge related to building the image, brand and good design and make contact with new clients and partners. – Event like this is a good opportunity to present your company and gain new parteners. In one day I exchanged business cards with about 40 entrepreneurs. Normally it takes me about a month – said Dominik Radecki from Domani Films. – Congress has broadened my horizons. I will leave Katowice full of energy and new ideas for the promotion of my company – admitted sales manager Katarzyna Rak from SGP Training & Consulting.
The panel devoted to the automotive industry was one of those who on the last day of the Congress attracted a large group of interested people, as well as in which active people from the world of politics, business and science actively participated. Invited experts, including Minister Jerzy Kwieciński, EU  commissioner Elżbieta Bieńkowska, presented issues related to the challenges faced by automative industry, the impact of new legal regulations on the development of the sector and zero-emissions urban transport. There were questions about the concept of Prime Minister Mateusz Morawiecki related to the production over the Vistula of a milion electric cars, preventing the import to Poland of old cars from Western Europe and legal regulations covering the automotive industry.
– Poland received a motivational kick from the European Union. However, not everyone will stay. Only those who have strong legs will survive. I am calm about the Polish market but we must cooperate with Europe – pointed the Director of Opel Manufacturing Poland Andrzej Korpak. One of the leading themes of the discussion was also the rivalry of Europe with The United States of China for dominance in the automotive sector.
– Maintaining a leading position is currently a challenge for our continent. The changes are very dynamic today, therefore we have a chance to define the future – said Jens Ocksen, president of Volkswagen Poznań.
The panel, whose discussion also included the automotive industry, was the meeting „Electromobility. Future is Electricity”. Experts debated on the futuristic possibilites of developing the automotive industry based on electricity and potential related opportunities. A lively discussion among experts was caused by hydrogen technology and costs associated with the purchase and maintenance of  electric cars. – In 2020 Volkswagen will launch the newest model for sale. It will be an electric car, built on a completely new platform, dedicated only to electric automation. Importantly – the price of this car will be comparable to the price of golf with a diesel engine. Kowalski, who can afford a new car, will be able to afford this car in 2020 – said Patryk Tryzubiak – PR and Corporation Affairs coordinator Volkswagen Group Polska.
Congress participants interested in the subjects of finances were attracted by the session „Capital for development – we have it!”. During the meeting it was possible to acquainted with the proposals dor financing small and medium-size enterprises. The speakers emphasized that both companies existing on the market for many years, as well as those newly created, have many opportunities to raise funds from external resources. – There is a lot of financing opportunities and the only element that limits entrepreneurs in obtaining finance is the lack of appropriate knowledge – said Tomasz Styczyński, Vice President of the Management Board of Bank PKO S.A.
In the „All Poland Special Economic Zone” session experts explained what the entry into force of the Act on supporting new investments means for entrepreneurs. The new regulations abolish the need to locate new enterprises only in special economic zones, which allows the use of tax brakes.
Experts have noted that the new rules will allow much more entrepreneurs take advantage of preferential terms than it has been so far. Session was preceded by the signing of a letter of intent between the Katowice Special Economic Zone and the Polish Geological Institute. Under the first agreement of this type, the Polish Geological Institute will create geological maps for future investments in the zone, which largely covers areas where mineral deposit may occur.
– Cooperation with PGI gives us assurance that the decisions we make for entrepreneurs will be based on reliable research. This is a pilot program that we want to implement not only in our region but also throughout Poland – said Janusz Michałek, President of the KSSE.

Interesting observations were made by the participants of „Smart (er) city” panel, in which The Minister of Investment and Development – Jerzy Kwieciński, took part. Contrary to the misconception of many Polish local governments the concept of smart cities does not consist in applying advanced technologies in every area of the city’s functioning. – Smart (er) city is a completely new approach in city management. The determinant of the city, which defines itself as a smart, is a high quality of life of its inhabitants and the level of development of the local economy – said Minister Kwieciński. The humanistic character of the smart city concept was also confirmed by other panelists among whom there where, among others, professors of the Silesian University of Technology.
Attendance success and the rich, multi-threaded three-day program confirmed that Congress is an important and awaited event by the entire SME sector. This is a good prognosis before the already confirmed, 9th edition of the European Congress of Small and Medium-sized Enterprises, which will take place on October 16-18, 2019. 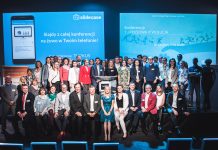